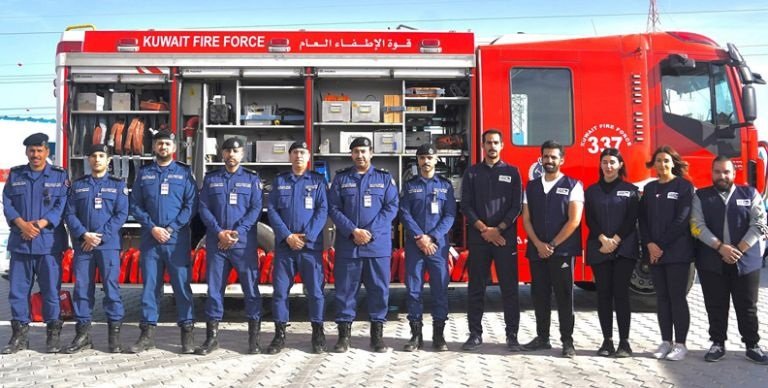 National Bank of Kuwait (NBK) and the Kuwait Fire Force continued their awareness safety campaign during the camping season. NBK volunteers along with the Kuwait Fire Force team visited various camping sites in north of Kuwait to provide campers with a safety camping it that includes a fire extinguisher, fire alarm and first aid support ensuring that camps adhere to regulations for safety and waste removal. “The campaign targets limiting the fire incidents in spring camping sites”, said Mohammad Al Sarraf, NBK Public Relations Officer. “NBK aims to help keep the environment clean and people safe this camping season. The camp site visits aim to urge campers to enhance their security as well as environmental awareness about precautions to be used to prevent campfires and maintain cleanliness”, he added.

The campaign is divided into phases. NBK volunteers and Fire Force team are going to visit more campsites to distribute the safety kits. Representatives from Kuwait Fire Force will also speak with campers and provide them with safety and security tips. On the other hand, NBK social media channels will be posting tips and videos on safety camping tips.

On his turn,  Lt. Colonel, Rashed Al Helfi from the Media Department of Kuwait Fire Force, praised the efforts and the influential role this campaign is playing to avoid accidents during camping.

Al-Halfi also indicated that the Kuwait Fire Force puts health and safety in its top priority. “During the camping season, we strengthen our awareness among campers in cooperation with partners such as the National Bank of Kuwait”.