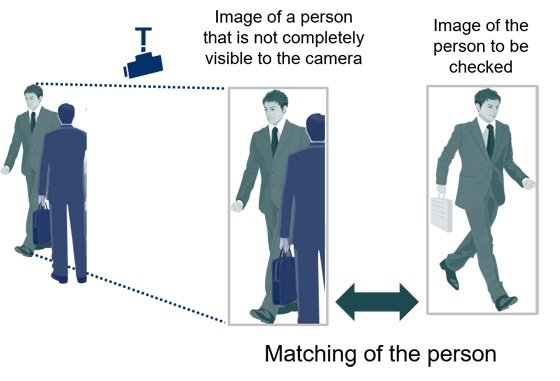 NEC announced the development of a “Person Re-identification Technology” that is capable of matching images of people whose figures are partially hidden from cameras, even if the image is taken from behind or from the side. This technology analyzes the entire appearance of a person’s photo image, such as their clothes and body shape, to determine whether they match with other images of people. Using the image analysis and deep learning technologies that NEC has cultivated through Facial Recognition Technology and other technologies, NEC was able to establish this high-precision technology that does not rely solely on facial images.

In many cases, Facial Recognition Technology alone may not be enough to match a person whose face is partially concealed. Conventionally, once a person was matched using Facial Recognition Technology, the appearance of that person could then be collected from images taken by multiple cameras. However, when there were many people and objects in an area, such as chairs and counters, people appearing in images of those areas cannot be fully scene, making it difficult to match them.

This technology enables a wide range of people to be recognized, even in places where there are many people or visual obstructions that prevent a person’s face or body from being fully seen.

Potential applications for this technology include security support in large-scale facilities with many people or visually blocked areas, as well as assistance in the search for lost children.